The elephant in the park

Northern Bear has joined other generous North East businesses and organisations in sponsoring an inspiring and colourful display of elephant sculptures. 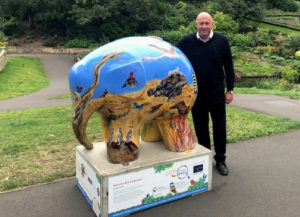 Elmer’s Great North Parade is organised by and raising vital funds for St Oswald’s Children’s Hospice, a charity providing care, love and support to babies, children and young adults with complex needs. For 11 weeks (until 1 November), 50 big and 114 little individually painted elephant sculptures are taking over North East streets, parks and public buildings in the biggest and brightest art trail ever seen in the region.

The sculpture that Northern Bear is sponsoring can be seen in Northumberland Park, North Shields. It is called Hakuna Ma Elephant and was designed and decorated by local wildlife artist Jina Gelder who says that this sculpture explores the natural habitat of the endangered African elephant and other animals that share its home.

Northern Bear director Keith Soulsby (pictured) said: “We are delighted to be part of this fundraising event that is both fun and thought-provoking. St Oswald’s Hospice is Northern Bear’s local charity of choice because we are so impressed by the amazing care and support they provide to children and families when they need it most.”

Elmer the Patchwork Elephant, written and illustrated by David McKee, remains one of the most iconic and widely read children’s book series of all time. The Elmer books have been translated into more than 50 languages and have sold over 8 million copies worldwide since it was first published by Andersen Press in 1989.

After the 11 week trail there will be a farewell weekend and an auction, where the sculptures will be sold to raise funds for St Oswald’s Hospice.