Jason Harrison Managing Director of Northern Bear Safety Ltd and Survey Drones has undergone a monumental feat of endurance in completing a 250km ultra-marathon. The 5-day multi-stage challenge saw Jason deep in the Wadi Rum desert of southern Jordon in October and raised a fantastic £2,500 for St Oswald’s Hospice.

Jason kindly provided Northern Bear with some truly eye opening and inspiring words recounting his once in a lifetime experience.

It was almost 5 o’clock in the morning and still pitched black in the desert. As I followed the trail marked by occasional glow sticks, my thoughts were suddenly interrupted by loud barking. We had been warned about wild dogs but had been promised that they would not approach us. As I turned my head to look for them, 3 pairs of eyes reflected back in my head torches beam. Startled, I increased my pace and glanced at my watch. 4 miles ran, 40 more to go. It was going to be a long day. 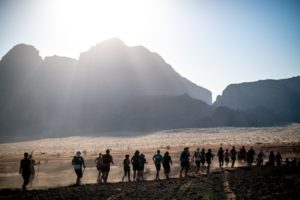 It had taken over a year of planning to get to the Wadi Rum desert in southern Jordan. Famed for its red sand and rock formations, it’s often used by Hollywood to recreate the surface of Mars. The challenge was a 250km, 5-day, multi-stage ultra-marathon. We would run by day and sleep in Bedouin camps by night, living off dehydrated food and energy bars. The race organisers supplied hot and cold water and open sided tents; we had to be self-sufficient in all other respects.

After flying into the Capital city, Amman, we attended a pre-race briefing and mandatory kit check on Sunday 3rd October, before being coached to the edge of the desert. We were then transferred into open back 4 x 4’s for our first night in a Bedouin camp in the desert proper.

We were eased in gently on Monday, day 1, with a 28-mile effort over a largely runnable route with only the occasional patches of soft sand. The sand and milage increased on day 2 with a tougher 30-mile course with long stretches of energy sapping dunes.

The desert was already claiming victims, with 2 of my tent mates having to drop out by day 2 with heat exhaustion. We were now settling into the race having established a routine of completing each days run, having our blistered feet fixed by the medics then a quick rehydrated meal. Most were in their sleeping bags and asleep by 8 pm. 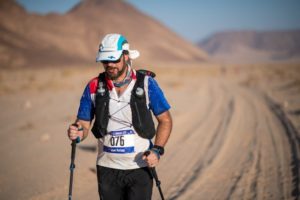 Day 3 was the big one – 44 miles. We were up at 2 am to start running at 4. The course was to take us into the heart of the desert through several narrow canyons. It was not going to be possible to transport the tents to our destination, so we had a night of sleeping under the stars to look forward to if we survived the day. I managed the first 30 miles without too much trouble. Starting in the dark granted us a few hours in the cool to bank some early miles, but as the sun rose, so did the heat and by mid-afternoon the airless canyons were like a pressure cooker. I was becoming dehydrated through sweating so much and was grateful for the checkpoints set at around every 6 miles with supplies of precious water, even if it was warm!

The last 13 miles were a real test of stamina and willpower. At mile 35, I passed a Frenchman sheltering in the shade of a rock. He was suffering from heat exhaustion and his friends had gone ahead to get help. I seriously considered joining him as I was also feeling weak and slightly dizzy, but I knew that my race would be over if I stopped, even for a rest. He encouraged me to run on, so, having checked he had enough liquids, I swallowed a salt tablet to replace the electrolytes I was losing through sweat and pressed on. The Frenchman was soon rescued by the medics in a 4 x 4 and was eventually evacuated back to the camp for further treatment. He recovered, but his race was finished. 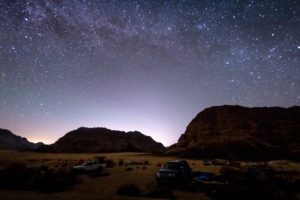 After a 13-and-a-half-hour effort, I finally crossed the line and found a hollow in the rocks to spend the night. As I zipped myself into my sleeping bag, I was blown away by the stars on display, with the milky way clearly visible. It was one of those unforgettable moments of the week.

The organisers had said that those that finished day 3 would very likely complete the race, so despite being up again at 5 am to start Thursday’s run at 7 am, I found that I had a renewed energy and the 24-mile sandy route was over in a flash and we were ready for the final day.

There was a definite party atmosphere in camp as the sun rose on day 5. Around 20 runners had dropped out due to numerous issues, but those of us who remained were determined to try and enjoy the final 26 miles ahead. The organisers seemed equally determined not to allow too much fun, and had set another tough, sandy course with a number of steep dunes to scale. The heat had been around 35 degrees Celsius most of the week, but this day was hotter still and an extra checkpoint was hastily introduced to make sure we got enough fluids. 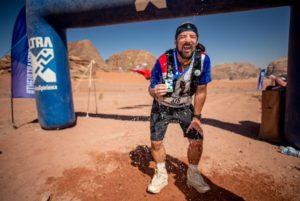 After about 6 hours and with my watch telling me that the end was imminent, I rounded a rock formation, and the last camp and finish line came into sight. I’ll confess to a few tears as I crossed the line to the applause of the organisers, medics and fellow runners – it was a very special moment!

The Bedouin had kindly provided a celebratory banquet for our final night in the desert and as I sat with my fellow runners around the campfire under the stars, I realised that I was extremely fortunate to be able to take part in such an event. It was an experience I will never forget (or do again!).

View the gallery (all photography by Benedict Tufnell) 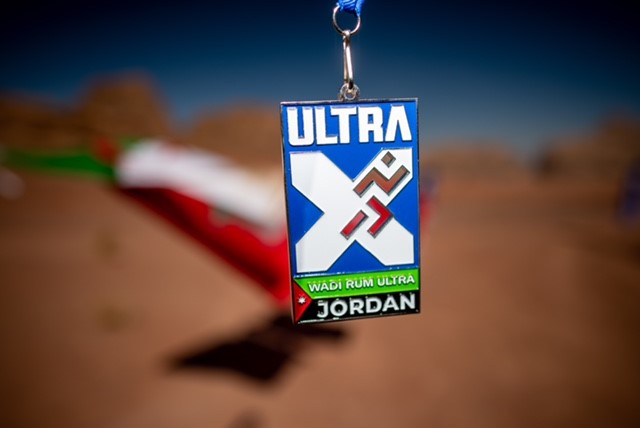 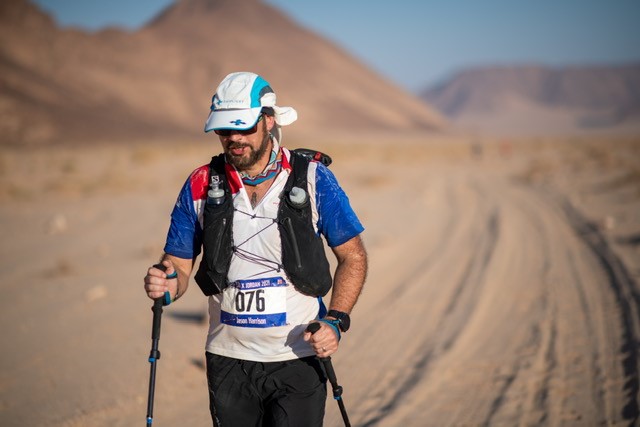 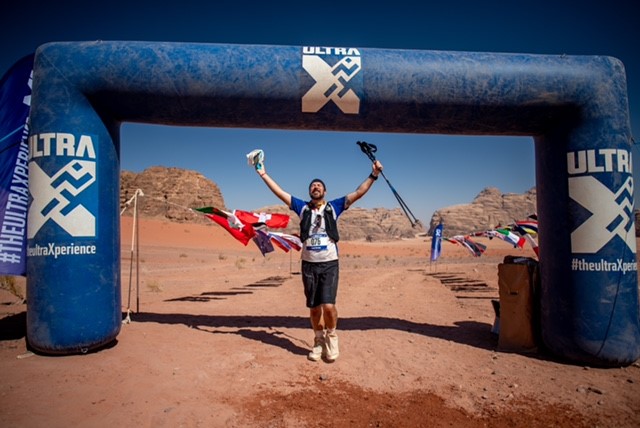 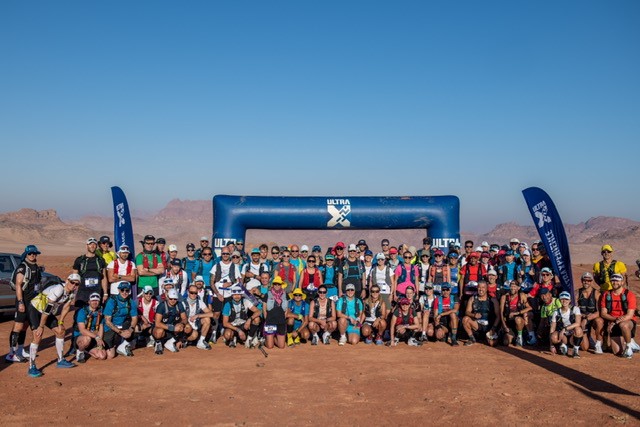 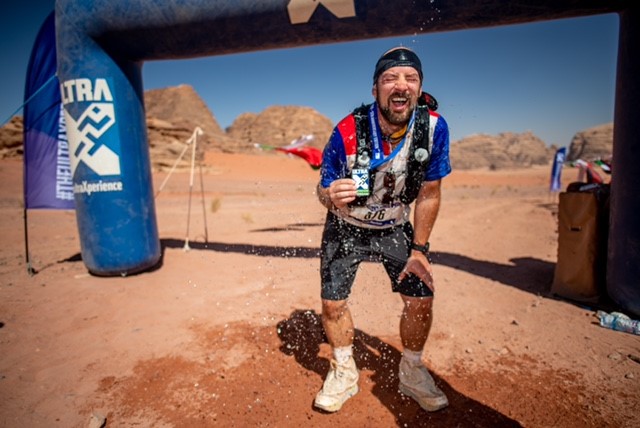 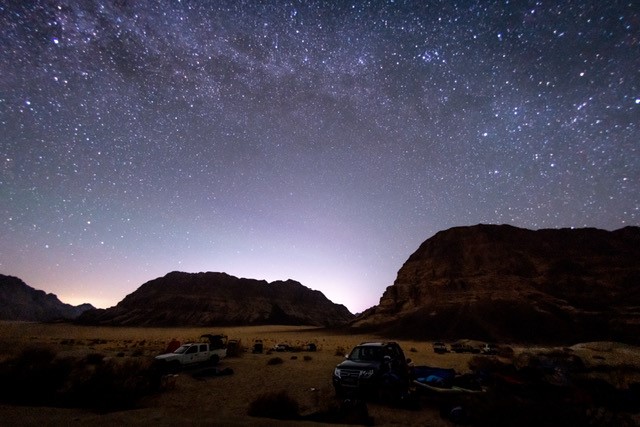