Steven Luke has been appointed as Managing Director of Wensley Roofing following a carefully planned succession. For the last two years Steven has been working alongside Keith Soulsby, the founder of Wensley Roofing, as Joint Managing Director. On 1 June 2020 Keith stepped away to concentrate on being Operations Director of Northern Bear, leaving Steven in sole charge. 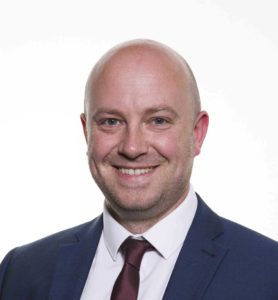 Steven said: “I feel honoured to lead the business that Keith built up from scratch. I have learnt so much from him over the years and I’m pleased he trusts me to take over.”

Steven started at Wensley Roofing in 2007 after he had been awarded a degree in Construction Management from Northumbria University. He worked in several roles and, as Senior Quantity Surveyor, he proved to be very adept at valuations and cost control.

Keith Soulsby felt that Steven had the potential to lead the business and gradually gave him more responsibility, eventually appointing him as Joint Managing Director in 2018. This allowed Keith more time to focus on the increasing demands of the strategic management of Northern Bear.

Steven said: “I’m not planning any big changes. Our work is building up again after a complete shut down. We are getting busier and busier each week. We have just started a major contract for re-roofing social housing for Northumberland County Council. We are waiting to see what happens with the demand for new build, which is an important part of our work.”