One of specialist companies in the Northern Bear group has been engaged to provide its lifesaving expertise for the most prestigious new residential building project in Newcastle upon Tyne. Isoler is installing the systems for fire protection and fire stopping in Hadrian’s Tower, which, at 89 metres will be the tallest building in Tyneside. 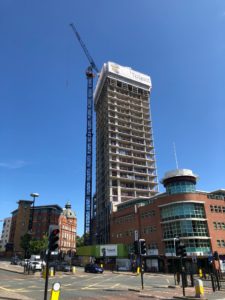 The 27-storey tower will include 162 apartments and luxury champagne bar and restaurant on the top floor. The new landmark building is being developed by the Newcastle-based High Street Group, which has grown rapidly since it was set up in 2006. The main building contractor is another Tyneside-based business, Tolent. The project started in December 2017 with demolition and site clearance and Hadrian’s Tower is expected to be completed by August 2020. Already a number of the apartments have been sold off plan to investors in the private rental market.

Isoler has been providing a comprehensive range of building integrity services to the public sector and the construction industry in the North of England for over 25 years. It has been responsible for the fire protection in many of the landmark buildings in the North East region including the Metro Centre, St James’ Park and the Sage Gateshead. It has provided fire protection for the two tallest tower blocks in Newcastle (for now): Vale House (80m) and Shieldfield House (77m).

Isoler is working on the site of Hadrian’s Tower now and is expecting to have a team there right up to completion. Asked if working on such a tall building presented any particular challenges, Isoler’s quantity surveyor Josh Watson said “We carry out fire stopping and compartmentalisation to the highest standard on all apartment buildings, regardless of height. Hadrian’s Tower is particularly hard work for our operatives. Since there are no lifts operating yet so there is an awful lot of walking up and down stairs!”