The sports pavilion in a much-loved community park has been brought back into use following a total refurbishment and new extension. The building in Eastwood Park in Prudhoe, Northumberland, had been used by sports teams from the adjacent playing fields but it had fallen into neglect because the facilities were inadequate and there were no showers. 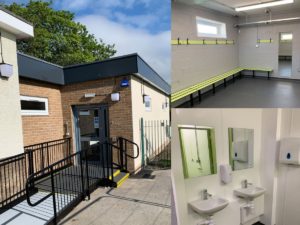 Northumberland County Council appointed Northern Bear Building Services to undertake the refurbishment and new build project, which was completed in May 2019 – less than six months from start to finish.

The refurbishment element of the project included a change to the layout which allowed for an accessible WC and larger kitchen area to be incorporated alongside a dedicated plant room for the joint buildings. A meeting room was also allocated to the existing building, and all of these features allowed the large main open plan area to become a flexible space for spectating and general events.

The new build extension contains two large changing areas each with separate showering and toilet areas. There is also a large reception area and a dedicated space for officials to change and shower. Given the addition of a large amount of additional facilities, the plant room housed within the existing building required extensive planning given the amount of plant that was required in such a compact space. Externally, the surrounding area received soft landscaping including Grasscrete areas to assist with the parking facilities whilst also providing a green space for the environment.

Full consideration was given to the accessibility of the completed project to bring the buildings into line with current regulations and to ensure that the space could be used by the entire community and visiting teams and their supporters. A fully compliant entrance facility with automatic door and push pad facility was instructed alongside necessary ramps and toilet facilities.