The £1.6m refurbishment of the historic Lifton House in Jesmond, Newcastle, is complete and the GMB trade union is packing up its city centre offices to move back into a property that was first occupied by the Boilermakers’ Union 130 years ago. 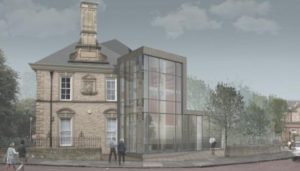 The entire building has been refurbished internally and externally to create a modern flexible working environment that has been designed to work in harmony with the existing historic features.

Northern Bear Building Services carried out the construction works on behalf of property consultancy Sanderson Weatherall who managed the project.

Neil Jukes, managing director of Northern Bear Building Services, said: “Our works entailed demolition of the old 1960s extension and the replacement of new modern fresh extension with a glazed facade to allow light to enter the building. The remaining 1900s building was then fitted out to a modern standard allowing for glazed partitions, raft ceilings to allow the building to have a more open and airy aspect.”

Billy Coates, Regional Secretary for the GMB, Northern Region, said: “The GMB is absolutely delighted in returning to occupying Lifton House, the former National Headquarters of the Boilermakers’ Union. Lifton House was the first purpose-built trade union headquarters in the late 19th century. It is a beautiful building in a wonderful part of Newcastle. It is fitting that the GMB Northern Region will be moving to a fit-for-purpose, state-of-the-art headquarters and set the scene for a modern 21st century union.”